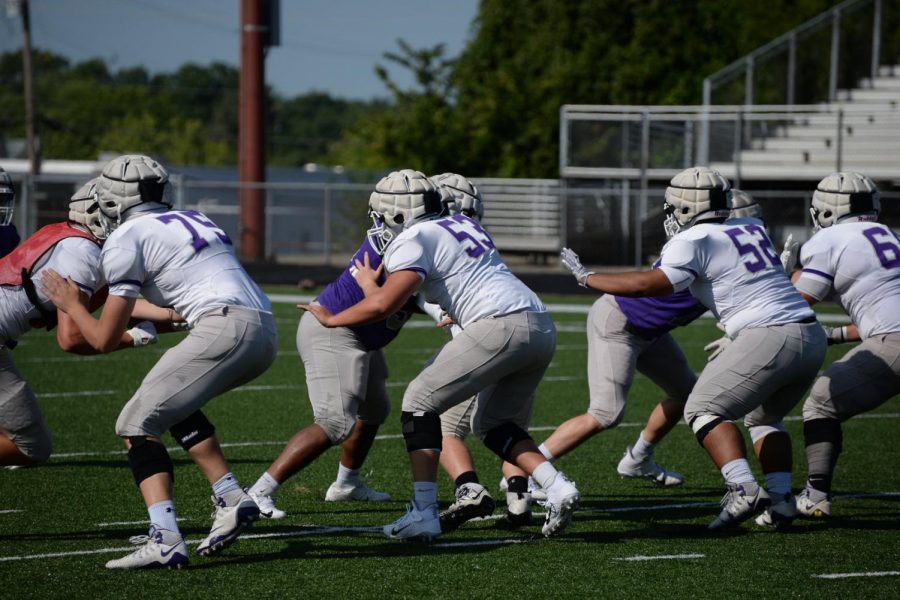 Panther football is just days away and expectations are high for a senior class of more than 35. Five of these seniors include the starting offensive line, a seldom talked about position that is crucial to the success of an offense. Although this is an all senior group, only two guys have starting experience.

Starting at left tackle is senior Trent Kirby. Kirby certainly fits the mold standing at 6 feet 6 inches and 235 pounds. He’ll have big shoes to fill as he replaces Sam Lewis. The left tackle position is very important for right handed quarterbacks because it protects the quarterback’s blind side. However, Kirby isn’t intimidated by the pressure, “I feel very confident. Being around great offensive line coaches for four years has really helped me grow as a player.”

To the right of Kirby is beloved Optimist Sports writer Brock Pedersen. Pedersen, who played linebacker in 2017 and defensive line in 2018, will now make the transition to offensive guard. Pedersen will replace Adam Frey, and teammate Nate Taylor thinks he is certainly capable of doing so.

“If anyone can jump into a new position their senior year, it’s Brock,” said Taylor. “He practices like he’s been a four year starter.”

In the middle is Fransisco Flores. Flores is a fan favorite because of his upbeat personality and amateur hip hop career. As a Mexican immigrant, American football came new to Flores, picking up the sport in seventh grade. Despite his limited experience, teammates and coaches have been nothing but impressed with how fast he has shown improvement.

“At first he was struggling,” senior tight end Reid Johnson said. “All of a sudden something just clicked for him and he’s looked really good.”

To the right of Flores returns Naif Alharbi. Like Flores, Alharbi is not American born and has picked things up very quickly, making the starting lineup last year after just two full seasons of playing football. He will look to build off of a solid season last year and bring the momentum into 2019.

At right tackle returns a familiar face in Taylor, who has been a solid starter since his freshman year. Taylor had a lot to say when it came to the new group of linemen, “we need more depth. Some of the younger guys need to step up. Every year, we have some injuries on the offensive line and seven or eight guys end up getting in the rotation. Right now, we have a solid starting core but the young guys need to step up.”

Taylor and the rest of the Panthers take on Castle this Friday at 7:30 p.m.