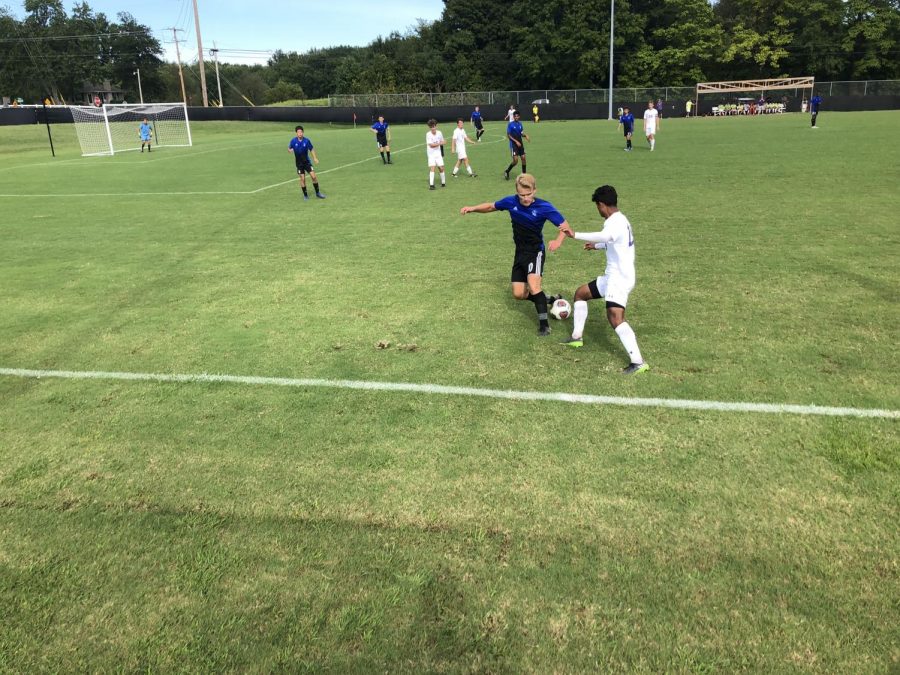 NEWBURGH- Just left, right, or perhaps just a bit of misfortune. Anyway you have it, No. 19 South soccer (0-0-1) stayed stout defensively at No. 4 Castle (1-0-1) but couldn’t capitalize on the attack.

With senior midfielders Logan Wilson and Grant Yeagley both sidelined with leg injuries, an even more youthful lineup had to take the field for South. Some figured this would leave South too feeble versus such a dependable unit in Castle. But Castle, sectional champions last season, faced the same predicament as South this season when they also had to deal with the departure of a talented senior core.

Alas, the game got off to a relatively lethargic start. Back and forth action produced few shots on goal for either side in the first half.

On the counterattack early on, Castle sophomore striker Xavier Scott sprinted his way toward South’s goal. His would’ve-been shot was broken up via a slide tackle by senior center back Colin Doyle (27:05 first half). Castle placed more emphasis on containing South’s attack than generating one of their own, as most of their offensive movement came on the counter in the form of through passes following a South turnover.

A free kick awarded to Castle late in the second half had many Panther fans tense, but the Knights’ junior striker Sean Kelly shanked it right (12:22 second half).

Castle, in a similar fashion to their football team on Friday, frankly wasn’t able to do much offensively. This was in large part due to the clamps of South’s defense, senior center backs Colin Doyle and Nathan Zeichner.

“We kept our defensive principles solid, had good high pressure, and when we needed to win the ball we went in hard. [Castle] couldn’t find a way around it,” said Zeichner.

Thanks to the efforts of the defense, junior goalkeeper Bennett Piper only had to make three saves in his varsity debut.

Senior midfielder Keegan Deemer and junior right back Josh Davis both played well, and were a big part of the reason South controlled the tempo most of the game.

On the attack, there were opportunities for South, but they were snuffed out quickly by a Castle defensive crew that swarmed South on most scoring chances.

A crosser from senior striker Sam Roberts was intercepted with ease by Castle junior goalkeeper Nigel Stoltz. Senior striker James Lundell was able to move the ball into the attacking third several times early on but unable to get a clear shot off. The lone uncontested look of the first half came from junior striker Miles York, but he skipped the ball right into Stoltz’s hands (7:09 first half).

In the second half, there were far more chances to be had, as South came out with a fiery approach on the attack. Roberts barely missed a long-range goal that hit off the left post (37:55 second half). Junior striker Kamal Yarbouh came off the bench and displayed some fancy moves, showing an ability to penetrate into the attacking third several times nearly single handedly, err, footedly. A ricochet off two Castle defenders created a great opportunity for sophomore striker Cooper Fox with 28 minutes left in the game, but it wasn’t to be had. Lundell created two clear shots but missed them just left (22:38 second half) and just right (1:11 second half).

Then, with less than a minute on the clock, South fans went ballistic after a well-placed pass from Roberts to Davis was tapped in for the go ahead goal. Castle’s home cooking refs thought otherwise, raising the flag in signal of offsides (video of the play can be found on Twitter @OptimistSports_).

Regardless of the ending, it was a heckuva performance by the Panthers, who proved they could compete with the state’s finest. Up next for South is a home date with Bedford North Lawrence on Tuesday Aug. 27.