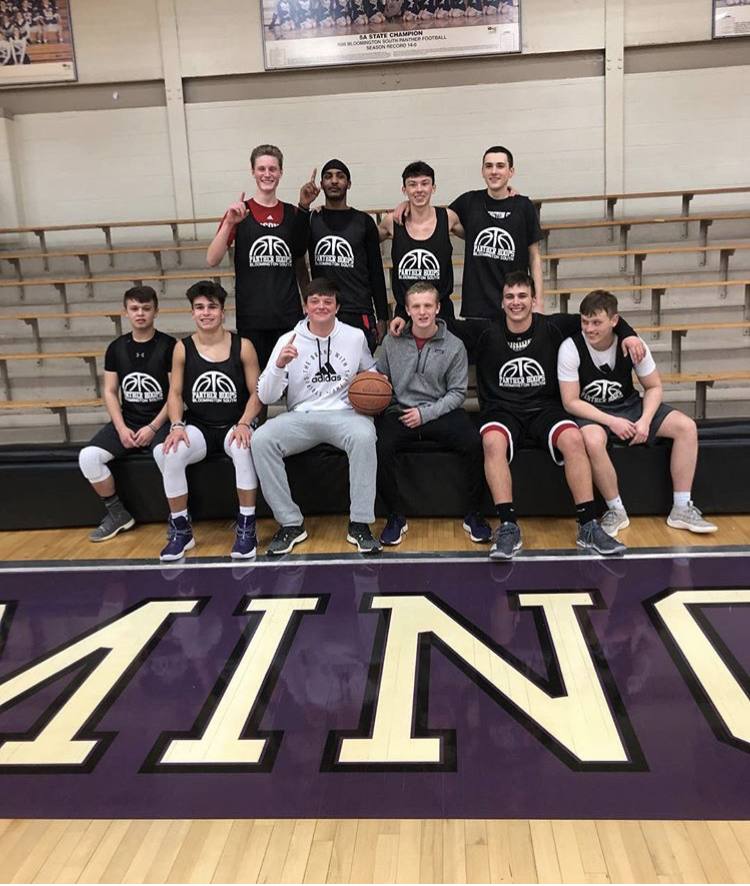 The most wonderful time of the year is back, baby! Panther Hoops is back and better than ever with a record amount of teams participating and a number of transactions that have shaken up the outlook for the league. After CMWK was ejected from the throne (literally) by the Ball Bros in last year’s championship game, it appeared as if the all-junior team would stay together and attempt to go back-to-back. However, the league saw a massive shake up as several members from last year’s Half Senders and Ball Bros departed from their original teams and combined with some fresh faces to form a whole new group of contenders.

It seems as if there is a clear top three, but outside of that, the field of contention is a bit fuzzy. There are several question marks all throughout the league, but the Optimist will do its best to put together a preseason preview that accurately evaluates the potential of each team.

After being the star for the Ball Bros last year, Stewart returns as the most lethal player in the league, this time for HYW. Stewart is, without a doubt,  the most complete player in the league, and he has the ability to take over a game whenever he wants to. Whether he is in the paint, popping a jumper, or clipping a three, it is almost impossible to successfully defend all the aspects of his game.

“My goal for the season is to catch a body,” said Stewart.

Underwood’s determination and fire is unmatched by any other player in the league. Sources say that he has made the southside YMCA his home for the winter and the league should fear for the day when he comes out of hibernation. While Underwood is solid on the offensive side, he is better known as a relentless defender and should fit in nicely on the new-look Half Senders.

Smith barely beat out the Fat Clips’ star player, Nick Cannon, but his shot is too lethal to disrespect. If Smith is given more than an inch of space behind the three-point line, he is going to make you pay. Also, with a less capable team this year, he should be able to showcase his clip even more.

Toohill played more of a 6th man role for the Half Senders last season, but he did not renew his contract with them and instead will take his talents to Vibe Check to become the face of the franchise. While his team may struggle at times, Toohill should still be able to get buckets on a regular basis and assert himself as a presence in the league.

It is hard to imagine that anyone besides HYW will be able to compete with Gashouse Gang as their collection of height and athleticism will be enough to overwhelm everyone else in the league. The addition of senior forward Houston Burdeshaw shook up the league and solidified Gashouse Gang as the team to beat. GG also has a wealth of basketball experience as Sammy Kestranek, Mason David, Peyton French, and Sean Azcui are all former South basketball players. They are a rare mix of North and South students with Sam Wercynzski, Tyler Gary, Max Graf, and Lane Tompkins all hailing from the northside. James Bomba will be the head coach and, like the infamous David Blatt, has been given a team that he can’t screw up. Their only weakness could be the lack of a clear star player.

“We’re running all the teams out of the gym” claims Kestranek.

HYW has a nice collection of talent and all the pieces that are needed for a championship team. They have the star in Zach Stewart, the big body in Nate Taylor, and the microwave in Tommy Sutkowski. Along with those three, HYW boasts the fundamentally sound and gritty trio of Drew Todd, Jack Gillard, and Reid Johnson. The bench could be a bit of a concern for them as former members of the Fat Clips, Reid Silvers and Brock Pedersen, will attempt to contribute what they can. Renowned Dr. Coach Paul Johnson and Harrodsburg hillbilly Colby Reed will know which rotations to put in at all times, though. “We’re just out here being ourselves” says Reed. HYW has the ability to take down Gashouse Gang, but it is the lack of depth and less talent overall that earns them their second place ranking. Former South basketball player Avery Brand was just recently acquired as well.

“We have the magic mullet, so we’re winning all” said mullet enthusiast Drew Todd.

After being the best of the rest in the 2019 season, the Half Senders decided to make some changes and brought in a couple new faces. Preseason DPOY Ron Underwood and northside senior Jake Chudy will look to fill in admirably for the departed Max Graf, Sam Wercynzski, and Tyler Gary. The key to this team is most definitely Diego Smith and his impeccable stroke though. Rarely does Smith miss, and when he does, it is not by much. In the paint, they will have Aidan Lowinger who will present a matchup nightmare for several teams throughout the league. Overall, expect to see the Half Senders play a version of bully ball and to attack teams in the paint with Smith as the sole shooter on the outside.

Off the bench: Chudy, Schlegel, Torbenson

The Best of the Rest

After not being able to live with the way his team was playing, coach Ethan Zaleski decided that it was time to come out of retirement and make an attempt to reestablish himself as the best spot-up shooter in the league. New additions include Grant Yeagley from the farm team, the Slim Clips, and the much sought after free agent Luke Smethurst. Smethurst has extinguished their need for a post presence and should be able to collect an ample amount of rebounds. Like HYW, the Fat Clips have all the pieces that are typically found on a high-caliber basketball team just with less talent and basketball experience. Nick Cannon is the star and Smethurst is the big body with the rest of the supporting cast maintaining the ability to ball out in any given game.

Off the bench: Law, Doyle, Zaleski

Splash is definitely one of the more unknown teams coming into the season as they are a team made up entirely of Panther Hoops rookies. They boast three members from North’s lethal passing attack on the gridiron in Jack Recker, Reece Lozano, and Bailen Murphy and should be able to wear teams out with their size. They are an interesting mix of sophomores, juniors, and one senior — Brexton Egbula, who is known to have some bunnies. From our limited knowledge, it looks like Murphy will be the star, and most of their team seems to have experience playing organized basketball. It will be interesting to see what they can do.

This all junior powerhouse led by Jas Saahir, Will Quigley, and Ethan Uhls is looking to make some noise this year. Skyscraper Will Quigley was a defensive monster last year and is looking to have a similar impact this year. While they don’t have the same four year experience as some of the senior teams, they definitely have the talent to make up for it. Saahir and Uhls should be two of their primary weapons on offense and look to lead this team into the upper echelon of the Panther Hoops league.

If you asked them, almost every member of Wet and Shloopy would probably tell you that they are going to win it all this year, but we beg to differ. Albeit they will bring massive amounts of energy and trash talk to their games, backing that talk up may be a little tougher than they think. Wet and Shloopy has a serious lack of height that will probably be their fatal flaw in any of their games against teams with a skilled big man. Make no mistake though, they are one of the more dedicated teams in the league as guards Peter Storm, Cooper Fox, and Nick Stright are often spotted at Asians, relentlessly working on their craft. As expected, Stright claims that they will be “dubbing all day everyday.”

Now that North teams are allowed in the league, it has become much tougher to be able to accurately preview all the teams from the northside of town. Vibe Check is definitely in that category. They are mostly made up of seniors but also have two sophomores. Every one of their players besides preseason MIP Ted Toohill is a rookie, so how much success they might have is hard to project. From what the gym rats at the YMCA have been saying, it seems like Vibe Check will be able to handle all the lower tier teams but will probably struggle against teams in the top two tiers.

Off the bench: Rodriguez, Lewis, Moore

Another team that is a complete question mark, it will be interesting to see who Swish Foundation really is. They are an all-North team and consist of seven juniors and one sophomore. Based mostly off of their Panther Hoops inexperience and their overall youth, the Swish Foundation will probably be wishing they can win their games against the top tier teams.

Winning four games last year, the Slim Clips project to be just as bad, if not worse this year. The Slim Clips are led by high volume shooting point guard Ryan Hudson, but there are only a handful of teams they can beat. After breaking the Panther Hoops record for three pointers attempted in a half (22), Hudson looks to build on a bad season last year and take even more shots this year. Sharpshooter Aditya Shah is capable of knocking the bottom out of the net at times, and sixth man Fahad Aloufi is explosive off the bench. Look for Thomas Like to sit the bench all game, only to come in late in the game and hit half court shots that save the Slim Clips from the jaws of defeat.

An all sophomore team led by team captain Vance Farrar, this team is relatively unknown with many first time players on the roster. Last season, Vance Farrar was a member of Jay True’s best squad in recent history. Shooting guard Gus Conrad can often be found at the Y playing in pickup 5v5 games. Historically, sophomore teams don’t fare too well in an elite league like Panther Hoops, and it shouldn’t be any different in this case. If history holds up, sophomores aren’t physically ready for the long and rigorous Panther Hoops schedule. They will have no problems with depth, however, with a ridiculously large 12-man roster.

Simply put, it will be a rough year for the Panther Hoops Elite. They are made up entirely of sophomores and freshmen, and their only bright spots will be the two David’s: “Wavy” David Rice and David Nussbaum. They will definitely be able to beat the three “Panther Hoops” teams but outside of that nothing is guaranteed, even against the Deep Threats.

After breaking the gender barrier and solidifying themselves in the history books as the first all-girls team in the history of the league (and, also, likely the worst), the Deep Threats are back for redemption. Deep Threat’s rabid fanbase was treated to a franchise-altering offseason. The organization announced the signing of four current members of South’s girls basketball team, a move that was instantly echoed on social media channels around the world. Three point shooting is going to be a pivotal piece to the Deep Threat’s success, and it looks like the team acquired the right players to fit their gameplan. Look for them to take care of the “Panther Hoops” teams and PH Elite once Ridner, Conner, Gillard, and Furr are officially on the roster.