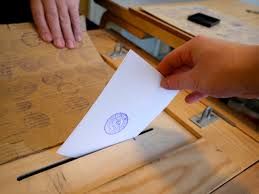 This November, the registered voters of the United States will elect (or re-elect) a president. However, there’s a lot of voting to go before getting to the general election. State caucuses and primaries will allow voters to choose which Democratic candidate they want to run against the incumbent Donald Trump.

Most state parties use primaries to determine a candidate for the general election, but there are six states that use caucuses, the most notable being Iowa. Since the Iowa caucus is first because of the way parties schedule their elections, it’s important because it shows candidates how they’re doing initially and gives winners momentum to win the whole election. People who vote in caucuses participate in a meeting with other members of the political party they belong to. In that meeting, delegates nominate a candidate for the election, but everyone at the meeting is actively involved in the process.

The more common choice states use for nominating candidates is the primary election. In primaries, voters of each party go to vote for the candidate they want to see running for president in the general election. It was instituted after caucuses, because it was thought that the public voting process in primaries would lead to less corruption than what is found in the caucus system. There are numerous kinds of primaries, including open primaries, closed primaries, and nonpartisan blanket primaries. The 2020 Indiana Democratic primary is an open primary, meaning that voters can vote for candidates in any party, no matter what party they are personally part of. For example, a Republican can vote for the Republican or Democratic nominee, and vice versa.

After all the caucuses and primaries, each party holds a national convention. Delegates from each state and in each party will cast their votes for a presidential nominee. The candidate in each party who wins the most votes from the primaries and caucuses will be their party’s nominee.

Finally, these nominees will run for president in the general election. This is the election that will select the president between a Democratic candidate, a Republican candidate, and perhaps some candidates from less prevalent parties, like the Libertarian or Green Party. All registered voters will be able to cast a vote for the one candidate they would like as president and their chosen VP. This is also known as the popular vote of the general election. The electoral college is also part of the general election. Every state has a certain number of electors based on its representation in Congress. The votes from the popular vote help determine how each state’s electors will go on to vote in the Electoral College. For example, if a state were to vote majority Democrat in the popular vote, all its electors would vote Democrat in the Electoral College. The electors pledge to vote for whichever party the majority of their state wants to succeed in the election. 538 electors are needed for a presidential and vice presidential candidate to win. The next general election is Nov. 3rd, 2020.

After almost four years of political unrest in the U.S., it will certainly be interesting to see what voters will do for the future of their nation.