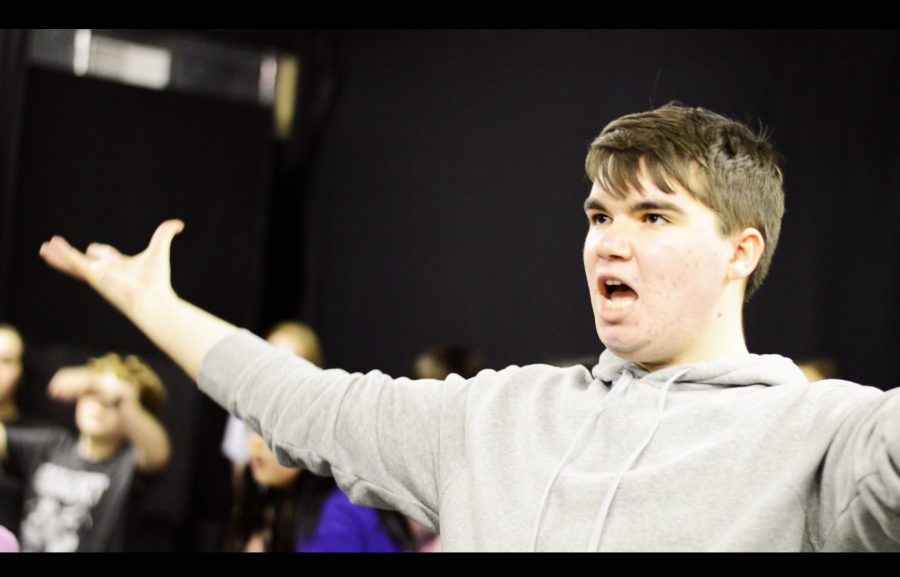 Joey McRoberts rehearses a number in Stages' production of "Matilda: The Musical"

Hilarity, the theme of growing up, and a bright display of song and dance will light up the stage in “Matilda: The Musical,” a stunning show based on the beloved tale by Roald Dahl. Stages Bloomington, a local youth theater company, will be tackling the challenge of putting on a wonderful production. When putting on a show, the process to bring together such a large production is often tedious and rocky. With the show to open in less than a week, some of the people involved in the show spoke about their experience as they near opening night.

When audiences experience a show, they get to see the polished, finished product, but putting together a musical, especially one as large as “Matilda,” is not an easy feat. Director Rory Willats, who has directed multiple large-scale productions with Stages already, talks about how he starts with the most intimidating pieces when he tackles a production this big.

“I always work on the thing that scares me first, because the solutions that you will find in the hardest part of the show will reveal something that will make the rest of the show easier,” Willats said.

Building a musical can be a frightening task, but Willats, a veteran of show-biz, is up for the challenge. For all the difficulty that can be crafting a show, the results are definitely rewarding.

“Part of what is exciting about this show is that it is deeply dependent on how we do it, and it feels so clearly representative of some of the things I’m feeling,” Willats said.

For the youth involved, they find this show to be a fun challenge. For Helen Christ, a senior at South, the biggest obstacle for her has been playing multiple small roles in the show. She plays a total of four roles: a nurse, a school kid, the acrobat, and the “sexy male dance partner” Rudolpho. According to Christ, it’s a challenge, but “it’s really fun because it means that you’ve gotta stay on your toes, and there’s always something to do.”

Another one of the young actors working on this show, Veronica Piurek,  plays the lead role of Matilda and comments on sharing a role with another.

“It’s interesting to see how other people play a part, because sometimes you deliver a line one way, and then when you hear it another way, it’s, like, “wow, that’s crazy, I didn’t think of that!” Piurek said.

After so much time and effort is put in from the actors and stage crew, the best part for Willats falls into place. His favorite thing is  “when a thing that was resonating with me in one of those first eight readings of the script spills from some technical staging of a moment into a room where we start to feel it communally and the cast notices that.”

“I like to think I’m like Tinkerbell and applause keeps me alive.I just love going out onstage and just sharing what I’ve been working so hard on, and having the audience laugh, clap, and just be involved in what I’ve been doing,” Christ said.

In essence, “Matilda: The Musical” is bound to be one for the books. It will be showing at the John Waldron Arts Center from Mar. 5, 6, 7 and 8, with shows at 2 and 7 pm. More information is available at https://www.stagesbloomington.org/.