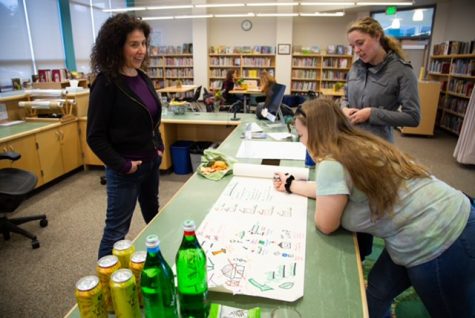 But first, she has to start close to home.

When Sparks went to the Project Green Challenge finals in Oct. 2019, she was tasked with starting her own climate action project. Sparks looked at the many environmental organizations in and around Indiana, and decided that the best she could do to help was by creating collaboration and spreading awareness between various local environmental groups.

“I chose to start a nonprofit that would hopefully bring together other groups in the area, because they’re all doing their own separate thing, and none of them are working together,” said Sparks.

And so she created Yellowwood Youth, an organization that she hopes to use to connect groups around Indiana. But she also wants to spread knowledge about those environmental organizations, and the various ways to get involved with them, to Hoosier youth.

“Showing people what they’re interested in, and they can find what it is they want to join, so they don’t have to be overwhelmed by how many [different groups] there are,” Sparks said her current task is.

“Right now is a lot of me scoping out other events, what are all of these other groups. I’m discovering hundreds of groups in Indiana that I never knew existed, and they all have these really specific visions, and all of these events.”

Sparks posts about these events on her Yellowwood Youth instagram page, @yellowwoodyouth, which is her main form of outreach at the moment.

Yellowwood Youth is an organization based around education, which Sparks believes is incredibly important to focus on right now. She says that it’s good how much of today’s youth is involved in activism, but believes that often, their involvement is not backed by education and information.

“There’s a difference between what we’re involved in now, it’s a lot of striking, a lot of protesting, it’s a lot of saying you care kind of things. But it’s not necessarily a lot of actual change-making. There’s not a lot of education happening.”

“It’ll make things a lot less daunting for kids that are starting to care.”