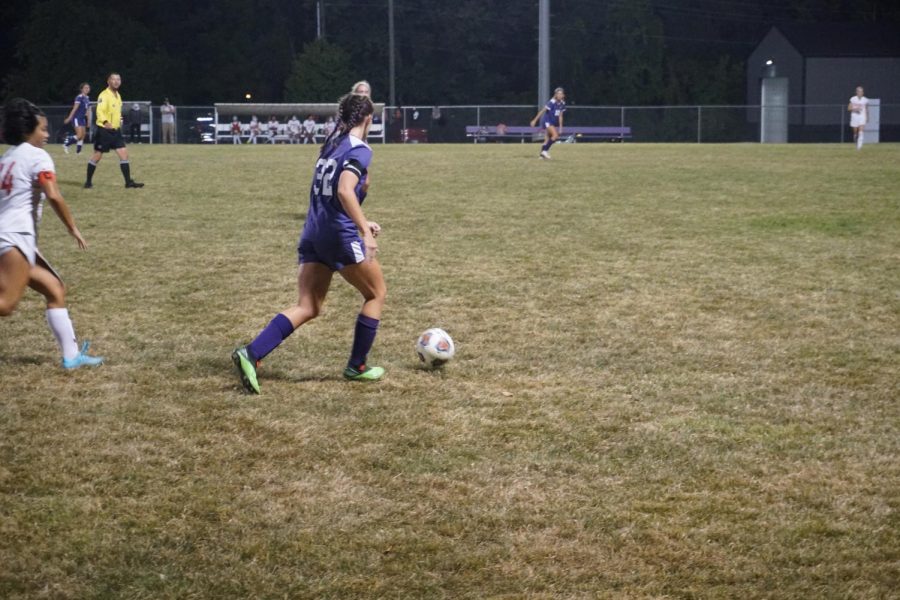 Katie Majercak (32) controls the ball against Southport on September 23, 2020.

This season was full of change for the South girls soccer team. They had to adjust to a new coach in first-year head coach David Prall. They had new leadership in the entirely new senior class. And of course, they had to deal with the ever-present fear of COVID. But even in a season full of change, the team kept one thing constant: winning.

They finished the regular season with a 12-1-1 record, including ten shutouts, and outscored their opponents by a whopping 52-8 through the season. And as conditioning and team practices kicked off at the end of the summer, avoiding COVID under the watchful eye of IHSAA, the players and coaches likely couldn’t have predicted how the season would go. If they had tried, though, their predictions probably wouldn’t have been too accurate.

“We were expecting to be good… but we I think we got a lot better than we thought we would be,” said junior Melea Miller.

Part of that improvement can be credited to Prall, who came to South after the retirement of longtime coach Ian Rickerby last fall. Prall, who had been the head coach at Bloomington North for the past few seasons, brought fresh ideas, plenty of experience, and a new face to the South team. A tricky transition in the best of times went off without a hitch even in these times.

“[The transition] wasn’t as difficult as I thought it was going to be,” said sophomore Nora Doyle.

Hagar and her fellow seniors can also be credited with helping the program, as they have stepped up greatly and taken over leadership and a much larger role on the team this year. Six graduating seniors in the class of 2020 cleared the stage for the class of 2021 to shine, and they’ve made the most of it. Goalkeeper Kristen Morgan played a large part in all of those shutouts. Lydia Gehlhausen has anchored the defense, and Katie Majercak and Hagar have done a lot of scoring for the Panthers.

“We have a great senior group… a lot of our seniors have been on varsity the past years so it wasn’t that big of a difference. Last year, our junior year, we were pretty high up there with the seniors, we were very close to them, so I think that really helped us transition,” said Hagar.

“Obviously we don’t know when our last game could be because of [COVID], so we’re always on edge,” said Hagar.

And on top of the fear of a cancelled season were the people vehemently against a season at all, the people that made the players extra-aware and extra-cautious about how they were practicing and conducting themselves.

“We definitely had to be careful in what we were doing, because there were always people that didn’t want us to have a season,” Doyle said.

But mere days away from their first semifinal game of the postseason, it’s looking like the team pulled it off and did everything right this season. The offense, led by Majercak, Hagar, Miller, and Doyle, was consistently on fire. The defense, headed by Gelhausen, Mya Hall, and Emma Shaw, was consistently impenetrable. The new coaching, guided by Prall, was consistently terrific.

And the Panthers will see if they can keep their momentum and make a deep run into the postseason this fall, starting with their first game against Terre Haute North on October 8.