The Scratch Pad, South’s literary magazine, will be publishing online this year.

The magazine is a part of Write On, South’s writing club. Write On aims to encourage creativity of all sorts at South. “We’re dedicated to creating a safe space for essentially any creatives in the building — we’ve had non writers too!” said Hanh Bui, who is a leader in the club. 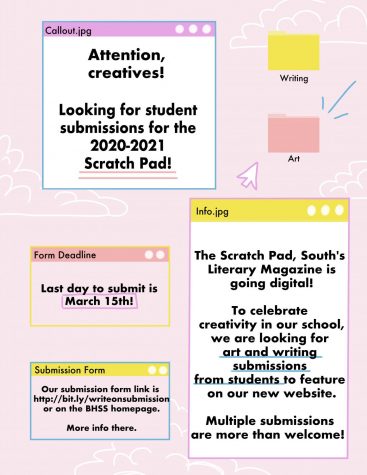 “This year, because of the pandemic, we decided to do a digital piece,” said Bui. In previous years, The Scratch Pad had prepared a physical magazine — it involved a lot of prep and fundraising, but with Write On and many other school clubs put on hold during the beginning of the year, that organization wasn’t possible. Bui, a South senior, believes this will be a more efficient way for students to have work published, as well as safer.

Bui, who became involved in Write On around sophomore year, has been writing her whole life. “When I was around 10 — this is embarrassing– I wrote a novel,” said Bui. “It was terrible.” Bui believes that Scratch Pad gives students a chance to show their work in a more casual way. “I think it encourages [students] to become a little more courageous, and can instill a sense of confidence,” said Bui. She also noted that getting writing published can be a hard step, and South’s literary magazine can give students a bit of a head start.

“Going towards a website format has actually freed up a lot of options for us this year! It was a happy accident,” said Bui. The group is discussing broadening what’s included in the piece — things like music and other creative formats. “Now that we aren’t limited by publishing and printing materials, there really are a lot of options.”

Bui encourages anyone interested in submitting to do so. “Whether it be your short stories, flash fiction, visual artwork, whatever it is that you make and that you’re proud of,” said Bui. “I think it really is a great opportunity to get [your] work out there… it’s a valuable experience and way to celebrate creativity.”

Students can go to  http://bit.ly/writeonsubmission to submit their work, and the deadline is April 9.