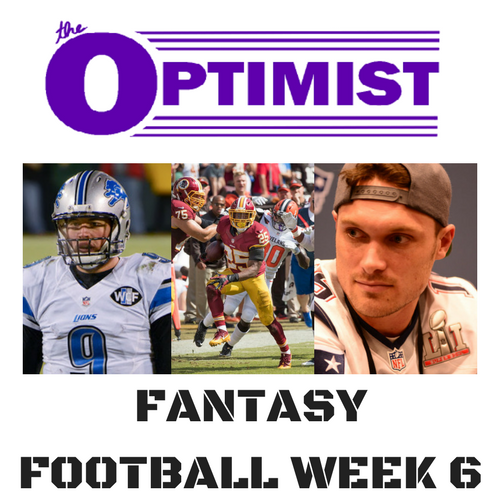 We’re past the first third of the season and as usual many valued fantasy players have been banged up. While these players hit the the injury room, many trusty backups willingly step up and emerge as stars. For example, Jordan Howard stepped up last year and became a top five running back. Look to John Law and Logan Hanchett to lead you through the complicated maze that is finding true diamonds in the rough.

Hogan looked solid in relief of Kizer against the Jets, and might just lead the Browns to a win this season.

Forte and Powell are hurt, leading many to believe that McGuire will receive a heavy workload against New England.

Lewis is now the top target for Manning, with the top 4 wide receivers going down with injuries.

Seferian-Jenkins has secretly been good this year and will continue to sneak through defenses in the future.

Watson is a bit of a cheat pick here, as he has already broken out (like 3 times), but he’ll go ballistic on Sunday against a disparaging Browns secondary.

Stafford is set to have a field day as the Lions pass-heavy attack meets the historically bad Saints secondary.

Thompson’s fantasy value is touchdown dependent, but he’ll hit paydirt at least twice against the Niners.

Gillislee hasn’t found the end zone in three weeks but has a good chance at breaking that streak this Sunday at New York.

Funchess has seen plenty of targets as Newton regained his confidence, and will breakout against the third-worst secondary in the league.

Hogan has become Brady’s #1 target in the absence of Edelman, and has a great chance of extending his TD streak to five games.

George Kittle lit up the Colts defense in Week 5 and Walker will get his turn at home on Monday night.

Goff fell back to earth last week against Seattle, and has another tough matchup against the young and talented Jaguars secondary.

With the inconsistency of Case Keenum, Diggs will struggle to perform, especially against the red hot Packers.

Roethlisberger, who threw 5 picks last week, is in a slump which will lead to stacked boxes against Bell. The Chiefs front seven is rock solid too.

Kelce is a bit inconsistent and will find trouble, even at home, against a Steelers defense that has only surrendered one TD to TE’s.