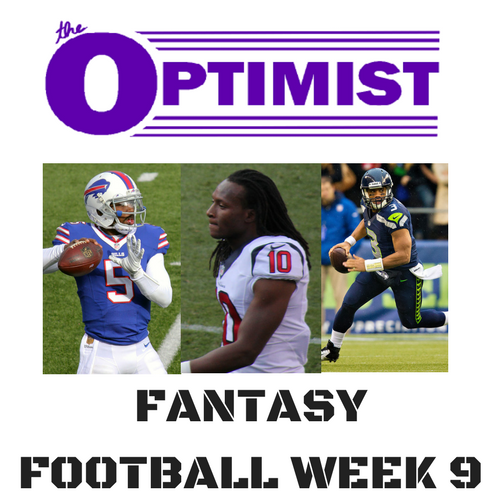 It was finals week, so if you were counting on a fantasy football report, we failed you. However, hopefully it forced you to focus on the slightly more important things in life, like school. This week marks something different, as J.T. Kelly will join the dynamic duo of John Law and Logan Hanchett to deliver your fantasy forecast.

Kelly brings experience to the table, serving as the Southside League’s commissioner since 2014. Although Kelly doesn’t have a fantastic winning tradition, he did finish third in 2015. Don’t worry though, we’ll keep his contributions minimal.

Whether you are in need of a QB or looking for some trade bait, Jimmy G is a smart pickup. In 2 starts he is 2-0, with 5 touchdowns and 0 interceptions.

Finally, it appears the Ravens have found a starting running back. If Collins is still sitting on waivers in your league, pick him up immediately.

Davis saw 13 targets in less than 5 quarters before suffering a hamstring injury. Look for Davis to get back in touch with Mariota against an inconsistent Ravens D.

Kroft has been a favorite target of Dalton since the loss of starter Tyler Eifert, which will continue against Jacksonville.

Taylor’s ability to run has secured consistent fantasy numbers in recent weeks, making for an intriguing matchup against the Jets.

QB: Russell Wilson (vs WAS)

Against defenses ranked 15th or worse, Wilson has averaged 28.2 points, and faces off against the 22nd ranked Redskins defense this week.

The Colts! Miller gets to face the horrendous Colts front seven this week, and continues to get heavy usage.

Ingram continues to play a big role in the dynamic Saints’ offense, and faces the struggling Buccaneers on Sunday.

The Colts! Hopkins joins Miller as the Texans’ offense goes bananas on Sunday.

While Bryant has been mediocre so far, he’ll break out against Kansas City.

Seferian-Jenkins will return to form against the Bills.

In case you haven’t heard, Ajayi got traded to Philadelphia. Now on a team loaded with explosive running backs, Ajayi will see much less usage.

Another shocking trade at the deadline saw Benjamin sent to Buffalo. He’ll be a bust this week while still learning the offense.

Facing the top defense in the league, Ebron won’t get much his way against the Packers.