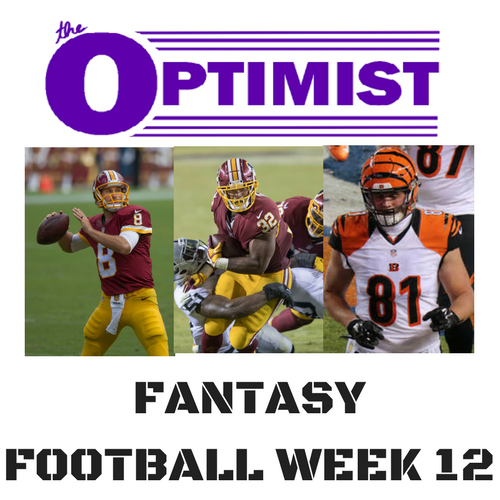 Week 11 went swell, so long as you didn’t lose on a knee like Kelly’s Krew. We hope you’ll spend Thanksgiving Day doing the important things in life…like watching football.

The Jags will continue to catch fire as Bortles faces a subpar Cardinals defense.

Williams is seeing plenty of touches and is making the best of them.

Mike Wallace is back in his early season scoring form, look for him to score again against Houston.

Ryan looks to get back on track this week with a favorable matchup.

Cousins has been solid in recent weeks and will breakout on Thanksgiving.

Perine has been polarizing when he’s played, and he’s only getting better.

Morris was effective last week and will hit pay dirt on Turkey Day.

Smith-Schuster struggled last week, but will turn things around against a poor Packers defense.

Funchess and the Panthers offense was dynamic against Miami, and he’ll be targeted heavily again.
TE: Tyler Kroft (vs CLE)

Kroft has solidified himself as Andy Dalton’s favorite scoring target. Against the Browns, scoring should not be an issue.

Dak has struggled, and things are only getting worse. The Chargers secondary wont show any mercy to Dak.

Philly’s D has proven to be the real deal, even though Howard is coming off a great week, he will struggle mightily against the Eagles.

Even though Larry Fitzgerald is Mr. Consistent, no one has a good day against Jalen Ramsey. and A.J. Boyue.

Henry won’t be doing much with Rivers looking constantly at his receivers.

Have a great Thanksgiving!