Panthers battle in tough loss to No. 1 New Albany (gallery) 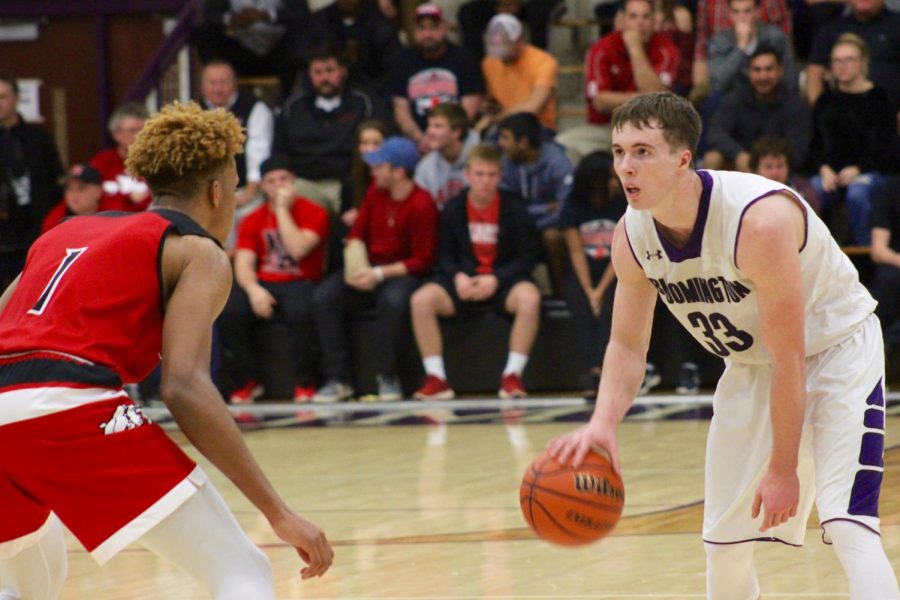 Chance Coyle (33) is guarded by IU recruit Romeo Langford (1). Coyle dropped 38 points against the Bulldogs, but the Panthers fell 58-70.

The No. 1 ranked New Albany Bulldogs traveled to Bloomington to play the Panthers this past Saturday night. Among the Bulldog squad was Romeo Langford, ranked as the No. 5 player in the Nation. Langford, who is being heavily recruited by Indiana, ended with 24 points on the night and was a catalyst for the bulldogs 70-58 triumph over South.

The atmosphere was electric on both sides, with the South student section decked from head to toe in black and chanting phrases like “Bobby Buckets” after Senior Chance Coyle delivered on some big plays. Although the Panthers struggled to find consistency on the offensive end, South standout and University of Southern Indiana commit Coyle shined, scoring a game high 38 points (14-18 fg) and managing to get some huge buckets when the Bulldogs started to pull away in the second half.

Junior Adam Graham also contributed offensively, with 13 points (6-9 fg) on the night stemming from a combination of well executed layups and a singular 3. “Chance and I got in a good rhythm in the first half and our guards kept feeding us the ball which allowed us to score as much as we did,” Graham said.

South’s sophomore duo of Anthony Leal and Noah Jager had their ups and downs during the game. Both contributing three points apiece. Jager once again looked confident running the point, dishing out several assists to Coyle and Graham. However; Jager seemed to have trouble finding his scoring touch, with several drives to the hoop bouncing out. Similarly, Leal was given the task of being the primary defender for Langford, and played some quality defense including a huge block in the 1st Quarter. “When shots weren’t falling I had to try to do something else to help my teammates and that was rebounding and defense,” Leal said.

The first half was tightly contested, with both teams trading points after South cut down an early 11-2 New Albany lead in the first quarter. The Panthers closed out the first half 28-26, but not before Langford threw down a tomahawk of a dunk that would foreshadow a dominant second half for the Bulldogs.

After halftime, New Albany responded with a 13-0 run, and although they managed to keep it close, the Panthers were unable to combat the deficit. The No. 9 ranked Panthers (1-1) showed potential of what they are capable of against the state’s top teams in the loss, but to find success, “we’ll need to make every possession count and find the open man.” said Graham.

The Bloomington South boys will be back in action December 1st at Bedford North Lawrence. South will look to stonewall the Stars after their 66-59 win against the Bloomington North Cougars.