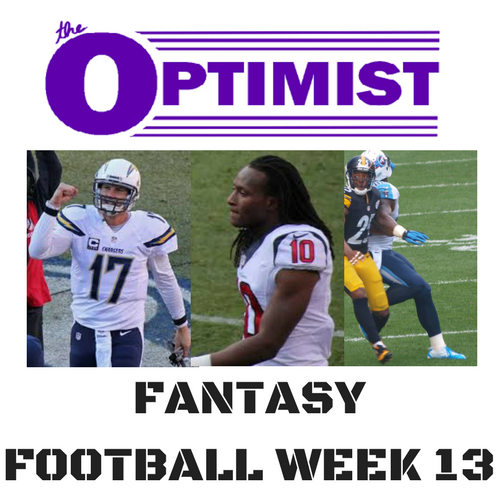 Playoffs start soon, add our predictions to your lineup if you’re pushing for the playoffs or a high seed.

The vet McCown has proven to be a trusty option throughout his career. He should easily get the job done against the Chiefs this week.

Doug Martin is unlikely to play, and Barber played great when he was in.

Goodwin is already proving to be more of a threat, now he has Jimmy Garoppolo under center, who threw a touchdown in his first few plays as a 49er.

The new tight end sensation in Arizona doesn’t have a super favorable matchup this week against the Rams. However, he is getting lots of targets due to the quarterback situation.

Goff has topped 300 yards in three of the last four games, and faces the third worst defense this week.

Rivers has looked good as the Chargers caught fire, and faces the BROWNS this week.

Howard has been pretty inconsistent this year, but he’ll turn on the jets this week and run all over the pathetic 49ers D.

Burkhead is the hot hand in New England right now, trust in him to continue his upward trajectory against the Bills.

Funchess is just about it when it comes to the Panthers receiving corps. He’ll continue to look good in Kelvin Benjamin’s absence.

Walker will be a good start this week, faces a depleted Texans D.

Everything is looking down for Stafford this week.

Coleman is no longer the starter and facing a top defense.

The Cowboys offense is a joke without Zeke, don’t look for Dez to get past Josh Norman.