If you asked my mother what I spend most of my time doing, she would probably say something like “all she does is stare at her phone!”

In truth, a large percent of my day is dedicated to looking at my phone. I’ll admit it—I am the typical phone-addicted millennial. I waste precious minutes of my day taking Buzzfeed quizzes or watching food videos, and I love it. So, you can imagine my outrage when I found out that majority of the current government wants to revoke net neutrality, which would mean I would be paying a lot more to go on the internet.

So, what really is net neutrality? In short, it forces all internet providers to treat the internet as a free market and offer all internet data and websites; this stops providers from making certain websites more expensive or slower. With the removal of net neutrality, internet providers can pick and choose websites for which they want to charge extra. For example, Comcast could charge $20 for a customer to visit Netflix, and there’s nothing anyone could do about it.

You may be asking yourself, can they really do that? Yes. If the act is repealed, Verizon, AT&T, Comcast, and many others can make you pay more to visit your favorite sites.

According to Ro Khanna, here’s what Portugal’s internet looks like without net neutrality. The same could very possibly happen to the United States. 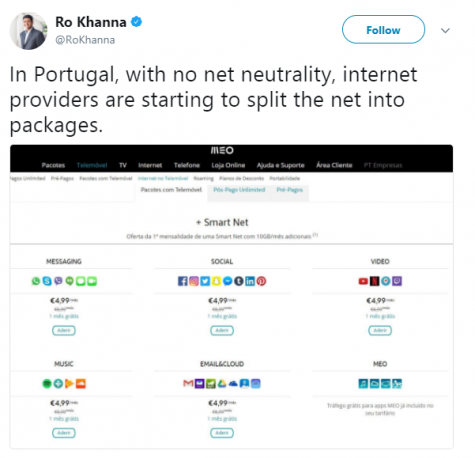 That’s not even the worst part. This could lead to severe consequences like censorship of the press. For example, let’s say, hypothetically, that AT&T is allied with Fox News, a conservative news corporation, and they want to stop their users from going to more liberal news websites.  In a world with no net neutrality, AT&T could charge you each time you went to the New York Times or CNN, encouraging you to go to Fox instead. Without net neutrality, any content that an internet carrier didn’t like could be blocked.

But net neutrality must help the people in some way, right? Wrong. The end of net neutrality would purely benefit big businesses that offer internet, leaving the rest of the United States with their pockets empty and their news censored. If the Federal Communications Commission votes to change the current net neutrality rules on December 14th, the internet as we know it we know could be gone in less than two weeks. In its place, an empty, restricted, and expensive internet will be all we are left with.